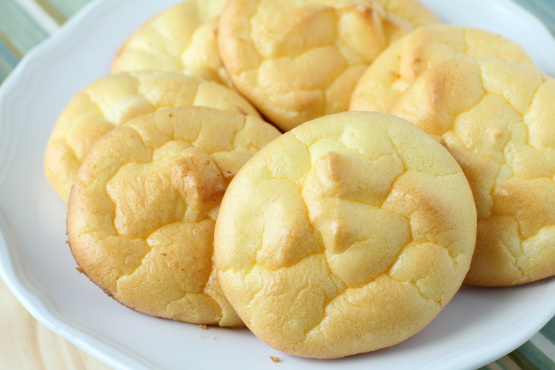 Preheat oven to 150 degrees celsius.
Separate the eggs very carefully, there must be no yolk in the white.
In one bowl, mix together the egg yolks, the 3 T. of Cottage Cheese and the stevia until smooth.
In the other bowl add 1/4 teaspoon of Cream of Tartar to the whites and beat the whites on high speed until they are fluffy and form nice peaks.
Very carefully fold the egg yolk mixture into the egg whites until mixed, but try and not break down the fluffiness of the egg whites too much.
Line your baking tray with baking paper.
With a large spoon, “scoop” the mixture into 10 even rounds on the sheets (about the size of the top-half of the hamburger bun; roughly 3/4 inch thick and 4 to 5 inches across).
Bake on the middle rack.
Here is when you have to watch them, because the cooking time the same on any two batches.
It is somewhere around 1/2 hour, but it could be less or more.
You just need to watch them until them become nice and golden brown (again, the color of a golden bun).
Remove from the pans and cool on a rack or cutting board.
While warm they are crumbly and similar to cooked meringue – but don’t let this fool you!
Once completely cool, seal them in a ziplock storage baggie or a tupperware overnight.
They will totally change their consistency, to something much more like bread – a softer texture that is nice and chewy.
If you do not like softer chewy bread, then eat them as they are, nice and crisp.
Since the sides that were facing the pan are perfectly flat, you use these to spread things on, or make sandwiches, or even as a burger bun!
The choice is up to you, and you will be quite amazed at how much like a bun these really are!

Serves 5 as a protein.

A $5 monthly account fee applies when you have a balance greater than zero at any time within the month. Your first payment is payable up front to complete your purchase. To view the full Terms and Conditions please click here